Here is a link to each anthology for sale on Lulu. These are for softcovers. If you go to the Lulu site, you can also find some hardcover and e-book versions.

Please leave comments below for the writers or email us at brothersinpen@yahoo.com. 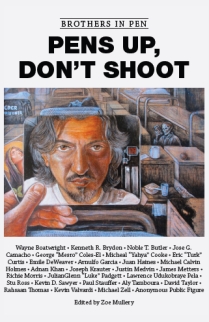 Brothers in Pen is the collective name of the writers in an ongoing creative writing workshop at San Quentin State Prison. This book contains selections of fiction in many genres: memoir, creative non-fiction, and some mutant hybrids… the common denominator being story. This is the ninth anthology produced by this class; as with Scheherazade of the Arabian Nights, the stories keep coming and keep enthralling. Ursula Le Guin said, “As you read a book word by word and page by page, you participate in its creation, just as a cellist playing a Bach suite participates, note by note, in the creation, the coming-to-be, the existence, of the music. And, as you read and re-read, the book of course participates in the creation of you, your thoughts and feelings, the size and temper of your soul.”

The Brothers in Pen invite you to participate in this book.
The Lulu page offers both hardcover and softcover options.

Brothers in Pen: The Ninth Annual Public Reading Once a year the San Quentin Wednesday Night Creative Writing Class, a.k.a. Brothers in Pen, holds an Annual Public Reading where an outside audience is invited in, along with other men in blue, to listen to five-minute pieces crafted by the writers especially for this event. This book of nineteen short stories represents the product of that labor in an event which took place in the ARC building on the lower yard of San Quentin State Prison on November 15, 2014. It was the ninth such event in the history of this particular class. Authors include Wayne Boatwright, Kenneth R. Brydon, Micheal “Yahya” Cooke, Eric Curtis, Emile DeWeaver, Arnulfo T. Garcia, Ron Koehler, J. “Killa Clown” Medvin, James R. Metters Jr., JulianGlenn Padgett, Kevin D. Sawyer, Ivan Skrblinski (aka Juan Haines), Paul Stauffer, Watani Stiner, Aly Tamboura, David Taylor, Rahsaan Thomas, A. Kevin Valvardi, Michael Zell. Cover art: “Faith” by Mwasi Fuvi

Brothers in Pen: Stories from the Annual Public Reading This book is a collection of the work read aloud by the Wednesday Night Creative Writing Class, or “Brothers in Pen,” at San Quentin State Prison on July 13, 2013. Each writer selected a five-minute excerpt to read to an audience gathered for this annual public event. As always, the stories were compelling, intense, funny and challenging and the day reverberated for a long time after it was through. This book is a keepsake of that day and a way of sharing a taste of the work being done in this class.Authors include Charles “Talib” Brooks, Kenneth R. Brydon, N. T. “Noble” Butler, Micheal “Yahya” Cooke, Eric Curtis, Emile DeWeaver, Arnulfo T. Garcia, Andrew Gazzeny, Jamal Green, Kris Himmelberger, Kimya, Ronald L. Koehler, Jeffrey Little, James R. Metters, Jr. JulianGlenn Padgett, Jerome Powell, Sr., Kevin D. Sawyer, Ivan Skrblinski, Paul Stauffer, Watani Stiner, Aly Tamboura, David Taylor, Rahsaan Thomas, A. Kevin Valvardi, Tommy Winfrey.

Our foreword was written by the illustrious Junot Díaz, author of The Brief Wondrous Life of Oscar Wao. Junot has visited our class twice and blasted us with an intense gale of insightful, incisive, story-rich writing wisdom. (Many thanks to Rose Elizondo for being our Junot connection!)

Brothers in Pen: Tragedy, Struggle and Hope (foreword by Tobias Wolff) This anthology of fiction and creative non-fiction was written in an ongoing writing workshop at San Quentin State Prison by twelve men, mostly Lifers, all serious writers. A strong theme emerging from this collection is the nature of violence and its effects on human beings, and the kind of struggle required to turn violence around. The subtitle of this anthology, “Tragedy, Struggle, and Hope,” speaks to this kind of vision. However, the seriousness of the subject matter doesn’t mean these stories are all heavy and harsh. There is much humor, wisdom, complexity and hope to be found in these pages. You’ll encounter struggles of temptation and forgiveness, soul-searching inquiries into the past, tragic love stories, battle bots, psychogenic amnesia, first-person accounts of Black Power history, prehistoric family drama, gang cease-fires, tommyknockers, and much more. Jeff Atkins, Kenny Brydon, Jerry Elster, R. F. Gilliam, Michael R. Harris, Tharon Hill, Ronin Holmes, Ernie Laszlo, Julian Padgett, Watani Stiner, Troy Williams, Michael Willis. Cover art by Ronnie Goodman.

Tobias Wolff at the gates of San Quentin

Brothers in Pen: A Means of Escape This is an anthology of short stories written in an ongoing writing workshop at San Quentin State Prison, San Quentin, California. Some stories are fiction, some memoir/creative non-fiction, and some a combination. If you’re looking for stories about rattlesnakes, Black Power, Santa’s demise, post-apocalyptic communities, prison boxing matches, one-day courtships, painful childhoods, transformation in the ‘hood, or the Lost Boys of Sudan, among other things, you’ve got the right book. The range of subject matter here is as wide as the imagination. This project is a culmination of over a year’s worth of labor by these men, many of them Lifers, all serious writers. All proceeds from the sale of this book go through the William James Association to support this creative writing class through the Arts-in-Corrections program. Authors include: Kenneth R. Brydon, Richard Gilliam, Tharon Hill, Ronin Holmes, Ernie Laszlo, Luke Padgett, Watani Stiner, Troy Williams, Michael Willis. Cover art by Ronnie Goodman.

Brothers in Pen (the first in the Brothers in Pen series) An anthology of short stories, both fiction and memoir, written by inmates at San Quentin State Prison. The stories in this collection run the gamut from dancing bears to crucifixion, childhood memoir to prison eulogy, heroic adventure to philosophical musing, and just plain fiction. The writers, mostly lifers, have each selected stories or excerpts from their ample and ever-growing supply to include in this volume. Writers include Kenny Brydon, Tharon Hill, Ronin, Ernie Laszlo, Watani Stiner, B. Vejvoda, J. B. Wells, Gary Wesley, and Michael Willis. All proceeds from the sale of the book go through the William James Association to support this creative writing class through the Arts-in-Corrections program.

Wednesdays at the “Q” This anthology was the first one produced in my creative writing class at San Quentin in 2001. It’s the only one that was a collaboration with one of the art classes and features beautiful color prints from the collage class. Writers include: John Cornell, guest writer Aida deArteaga, Gerhard Hanneman, Douglas S. Ingham, Carl Merton Irons II, Philip McLuckie, Ralph Michalak, Larry Miller, George Montross, Lovett Moore, James Pennington, James Potter II, Robert Sciarrillo, Holly Wood. 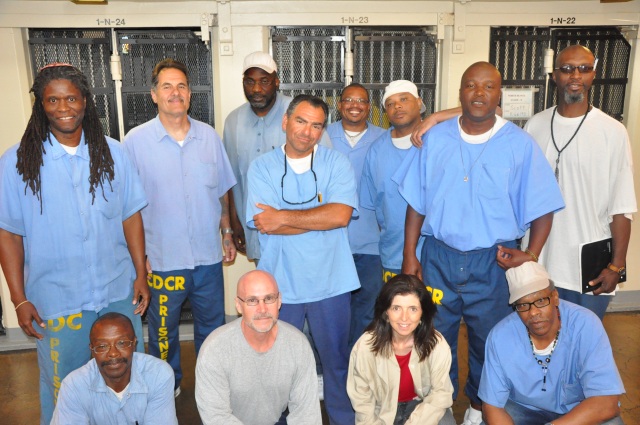 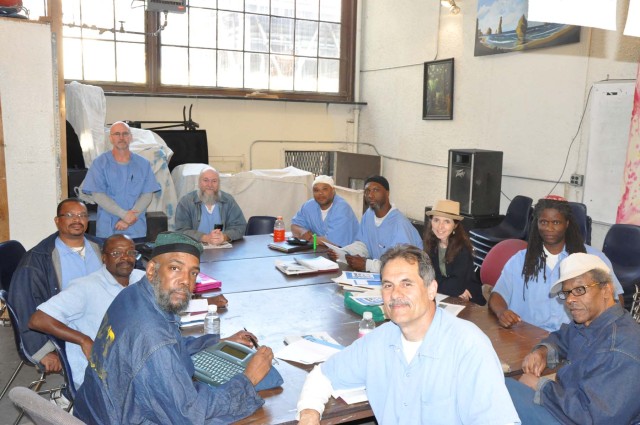